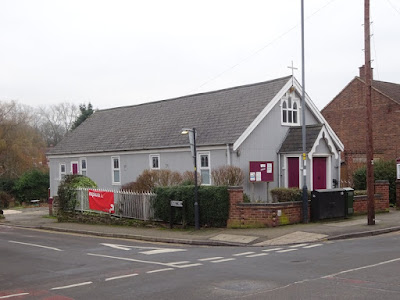 Christmas Day brings about a dozen or more people to my closest church. There were more for yesterday’s Carol Service but then we DID get candles. I’m not the oldest person there but, even at about 400 yards, I’ve probably travelled the furthest. A very modest piano accompaniment for the carols and readings from the same two ladies throughout - this is not an over-resourced church.

I’ve been here a few times now: Christmas, Easter, choral concerts and a Romany Pie anthology gig to help pay for vandalism. I’ve also been in here to vote. It’s always struck me as a church which has dropped past a line below which everyone has tacitly accepted it probably won’t recover. The effort needed to attract new people will always be greater than the results achieved. Building on some traditional received thoughts about the never-changing rituals of Christmas (the food, the tree, the presents etc), the vicar poses the question of whether such tradition is as much about reassuring us we’re still going as it is about excusing our lack of adventure and exploration.

I think, looking round the church, he’s right. Robes and trappings based on the truly ancient, forms of language redundant for everything but church liturgy and prayers that have to creak to accommodate modern concerns. One man’s traditional can easily become another’s moribund. There’s talk of taking God’s message out into the world and spreading the glad tidings of our saviour’s birth but it’s hard to see such a wave of evangelism starting from here. The noticeboard by the roadside at the front is probably the best bet, among the parish notices and group invitations which first alerted me to what a community-minded church this is and how it deserves my support.

It’s while pondering the vicar’s words that the idea for this project forms in my mind. If church life - or any religious life for that matter - is to mean anything then it has to be somewhere I could arrive at as an explorer rather than as a casual onlooker at someone else’s museum of unalterable ritual. There must be churches (as I know there are temples and mosques) where that sense of progress and movement exists. I just have to find them.

I shall go on a pilgrimage, albeit a very small one. That other redundant tradition, the new year’s resolution, provides the excuse and I even invest in a notebook and a fresh charge of the camera. Out into the world I go, a modern pilgrim in search of inspiration, education and enlightenment.
Posted by Matthew Salisbury at 07:29 No comments: