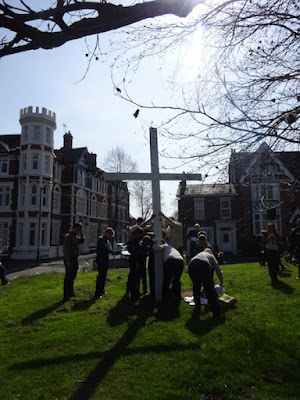 Having lived in Kenilworth longer than I’ve lived anywhere else, I’ve witnessed this annual Good Friday demonstration of worship and faith many times although I have never before joined in.

This Walk of Witness is organised by Churches Together, a group which does exactly what it says on the tin. There are representatives from the Methodists, United Reformed Church and Catholics together with the Anglican churches around the town and beyond. There’s a voice for the younger people too in the shape of Kenilworth Youth for Christ.

I haven’t been inside St John’s for along time. It’s been comprehensively remodelled and is now a multi-purpose open space capturing lots of light on this beautiful morning. I will come back here properly later in the year. As is to be expected of any church gathering, the whole thing starts with refreshments, and it will end with more of the same at a different church. The coffee urn in full flow and plates piled with hot cross buns remind me of how much I miss treats like this. Oh well, it’s a problem of my own making and I suppose we all have our cross to bear. No time to dwell on buns though as the cross is lifted and the procession forms up behind it.

It’s an odd sight in many ways. Around a hundred people - growing to many times that over the course of the walk’s progress - stretched out behind a huge white wooden cross being carried by a team of scouts and others up through the town. It’s odd because it doesn’t stop the town. In these days of excessive safety consciousness you might expect road closures and police escort - and a hefty bill to go with it. 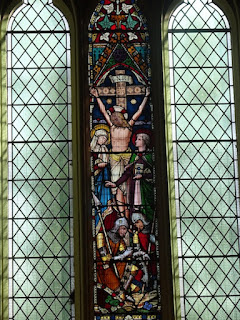 But that’s not the case here. Instead we wind our way up through bemused shoppers hunting the last minute chocolate eggs and mint sauce which seem to symbolise Easter for most. There are volunteer stewards on hand to pause the traffic as we cross but this feels like a procession OF the town rather than one which merely passes through it.

There are lots of other marches and demonstrations today, quite apart from the many Walks of Witness taking place. London is in the grip of climate change activists disrupting the capital to make their fears abundantly known; in Paris there’s controversy surrounding the yellow-vested protesters choosing a meeting point in the shadow of the roofless, partly-collapsed Notre-Dame. In any number of football grounds there will be protests about recalcitrant owners or under-performing players. All these gatherings will have plenty of participants and be addressed by speakers praising their presence and underlining what it’s all about. That’s no different here. And those taking part should be (and are) proud to be doing what they’re doing.

The main address to the assembled comes from the town’s Catholic church. Father Kevin Hooper invites us to recognise the way the Easter story brings the different denominations together rather than highlight any differences there may be. It’s a theme that will probably be heard in London, Paris and elsewhere, but looking around the hundreds of faces gathered here, there is a palpable feeling of solidarity. 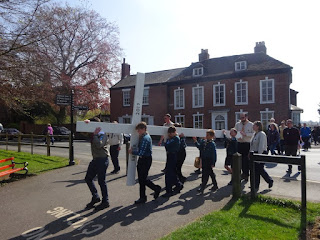 There’s prayers and hymns and personal testimony heard in equal measure by those in the midst of the throng and those enjoying the first al-fresco coffee of the year at tables in the sun.

By the time the cross has made its way to its Easter resting place in Abbey Fields the crowd has grown again. The team of scouts set a decent pace slowed only be the need to negotiate the low-hanging branches of trees. I doubt many of those destined for the cross would have shown such verve and spirit in getting there. With the lengthy crocodile of followers still hundreds of yards behind, there’s plenty of time to hoist the cross Iwo Jima style and settle it in place. There it will stand as a reminder to dog walkers, joggers and those zooming past in their cars of the real meaning of this extended Bank Holiday weekend.

In some ways it’s a small demonstration of faith - thankfully the full-throttle reconstructions complete with horrifying self-sacrifices in the Philippines are not the style here. But it’s a hugely important act for those who believe. The crucifixion and resurrection offers such a lesson of love and sacrifice, of triumph and renewed hope it really is the basis of everything Christians. And something well-worth taking to the streets for. 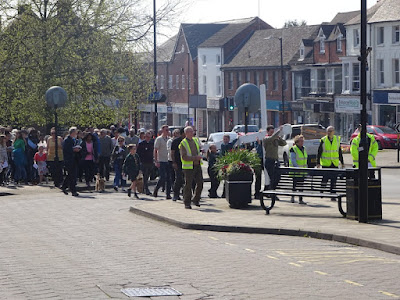 Posted by Matthew Salisbury at 08:56 No comments: