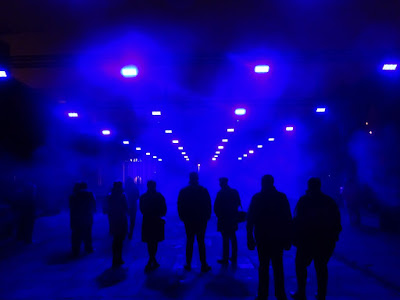 I wasn’t intending a visit to the cathedral. I happened to be filling in time before viewing an art installation in the ruins of the old cathedral (more below) and noticed an Evening Prayer service scheduled to start in a few minutes.

The cathedral has closed for the day - so says the notice on the door. It’s almost completely in silent darkness but I go in anyway. There’s a small pool of light at the reception desk and I’m pointed toward the Lady Chapel, the only other pool of light right down the far end. It’s an eerie prospect.

The Lady Chapel, is literally at the feet of Christ. It’s pressed up against the wall dominated by the cathedral’s most famous artefact, Graham Sutherland’s iconic (and finally the word is correctly used) and overpowering tapestry. So dwarfed am I that the sneaky picture I took only just about reaches the top.

The chapel is deserted. There is nobody here but me and I begin to have doubts over whether I’ve got the right place or time. I know that I have. My previous record for scant attendances at a cathedral service came with a very early morning stop at Winchester on my way to Brighton at which we were still in single figures. This is different. I am entirely alone in this huge space. My watch ticks well past the appointed start time and I’m about to give up the ghost when, in many ways, the ghost finds me. 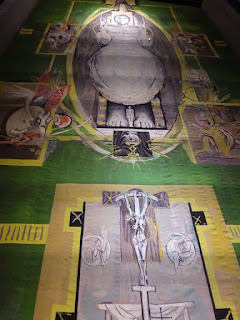 Quiet, slow footsteps bring a man of the same qualities. Obviously clergy, possibly a lay preacher, he looks at me but says nothing.

“Is it just me?” I ask rather unnecessarily.

He says nothing for about twenty seconds and then asks: “Would you like to read from the Bible?”

“Why ever not? Do you usually get more people?”

“It’s not known,” he says after a gap of a good ten seconds.

And so the service begins. John (I later find out his name as I feel the need to say something as we depart) sits at the side and quietly says a number of short prayers often repeating lines three or four time. I have no idea why, but he says ‘God made us, not we ourselves’ and ‘We are the sheep of his pasture’ over and over. There are gaps of at least a minute during which his breathing becomes so like that of sleep that I fear I may have to gently slope off and leave him in peace, presumably to be discovered by the early shift in the morning. Out of one lengthy silence he announces the first reading and I read John’s Second Letter to nobody but myself and a sleeping cleric. One or two prayers later and, at the end of the king of all silences, he gently closes his books and gets gingerly to his feet. It’s over.

I will have to ponder what purpose was served by this oddest of encounters. It is, I expect, an example of the cathedral just going about its daily offices. It may be that John doesn’t always have an audience for his quiet, patient reflections. Either way it is more a pleasure than an oddity.

“Have you been at the cathedral a long time?” I ask.
“Always.”
I wonder. But it was good to meet you John.

Outside in the old ruins I experience the pounding world music and art soundtrack of Sun Rise. It turns out to be seventeen minutes of smoke, lights and mysterious intonings. Not all that different from what’s usually on offer back over the road, even down to the bemused but respectful onlookers. Something about the rising sun as renewal perhaps - but the crimson light, pounding noise and drifting smoke remind me of a different dawn in this very space. Reconciliation brings the chance of renewal. Thank heavens for new days and new chances.

As I pass the cathedral on my way back to the car, preparations are continuing for the next gathering - a showing of the Marx Brothers’ comedy Duck Soup on a huge inflatable screen in the middle of the nave. I kid you not. Let’s hope someone turns up. 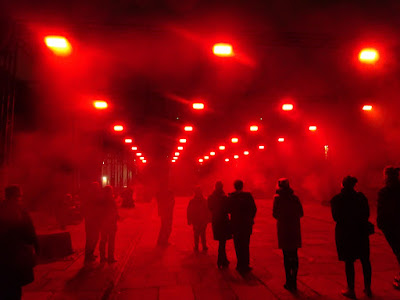 Posted by Matthew Salisbury at 11:57 4 comments: