57. All Saints and War Memorial, Leamington 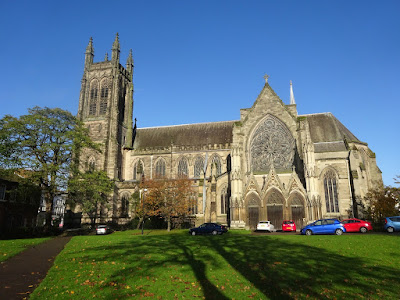 All Saints really is a jewel in Leamington’s crown. I’ve certainly been to smaller cathedrals and ones without the wonderful sense of space and light this church has. In recent years it has become a regular venue in the town for music concerts and, oddly enough given the years I’ve been here, it’s to these I’ve been, never to a standard service.

This morning is Remembrance Sunday and we’re starting this communion service an hour early to allow time for the congregation and, more importantly, the choir to head up the Parade to the war memorial for the wreath-laying and civic silence at 11.00. Perhaps because of that we’re very thin on the ground. Given the significance of the day and the proximity of the church to the public memorial I’d arrived expecting crowds. There were twelve of us. 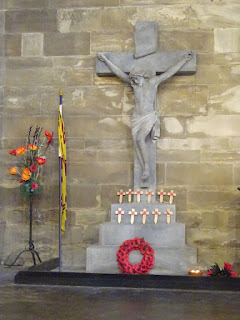 Thankfully there are more in the choir as All Saints has always been strong when it comes to music. It’s a slightly truncated service but there’s still time for a brief sermon reflecting how the world needs to be ever-vigilant to prevent a return to the chaos of two world wars. Burke’s oft-quoted truth about evil’s triumph requiring only for good people to do nothing is as chillingly accurate as it ever was - we just seem to have a problem these days identifying who the good people are and working out precisely what they should do.

After a hasty spot of refreshment for the choir we decamp a few hundred yards up the road to join a large crowd awaiting the arrival of the mayor et al. Yesterday I witnessed this same mayor representing the town through two hours or more of wildly enthusiastic, pounding, brightly-coloured Diwali celebrations at the Sikh Community Centre. Today’s flags, cadets, silver band and hymns must seem a world away.

I can still recall my first Remembrance service probably about fifty years ago and during a very brief period when I’d joined the cubs. I remember having to march in lines behind a banner, sit for hours in a cold church and then stay silent for what seemed even longer while everyone stared at the ground. It was as cold then as it is today, although at least the fifty years has provided me with the sense to wear long trousers. 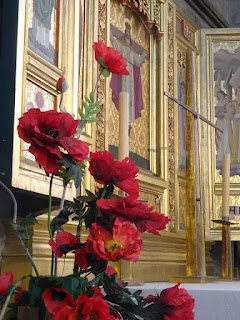 I’ve always had a difficulty working out exactly the relationship between church and military. The church, with its promise of a life beyond this one, certainly has a role to play in helping salve the grief of the countless bereaved souls war leaves behind. And there is something of the church’s constant call for peace and understanding which can only help what meagre efforts nations make to avoid reaching for arms in the first place. But to tell those facing horrific combat that God is on their side, particularly when the enemy have the same God in their spiritual armoury, is plain daft.

Perhaps in these modern times the role of the church is taken by others. Secular alternatives will one day dominate. Go to any football ground at this time of year and you’ll find veterans on show, poppies ironed onto the players’ shirts and a silence far better observed than I witnesses toward the fringes of today’s gathering. I seriously wonder why some people actually turn up so poor is their concentration, so flimsy their commitment.

Where I stood, the prayers were ignored in favour of capturing the best video on the phone, the hymns largely left unsung. The silence fought against a constant barrage of chatting parents telling children to be quiet and - I kid you not - a woman humming along with The Last Post. And at the back of the pavement crowd a constantly shuffling stream of people anxious to get past this obstruction in time for the shops to open.

One day this may all simply fade away. The congregation will dwindle as will the scouts and cadets, and perhaps simply ‘liking’ a Remembrance page on social media will be sufficient to register a nod of appreciation to the countless fallen. And will that actually matter?

In the end all this rigmarole and parading amounts to very little. This is a simple act of remembrance. It’s not about glorifying the military, or about supporting a religion, any religion. It’s not about nationalistic pride or lauding it over the vanquished. It’s just about remembering - and promising to keep on remembering - a generation of people who either had no choice or who made the choice to put the greater good ahead of their own lives. And remembering, like all moral actions, is something you can do on your own. We shouldn’t forget that. 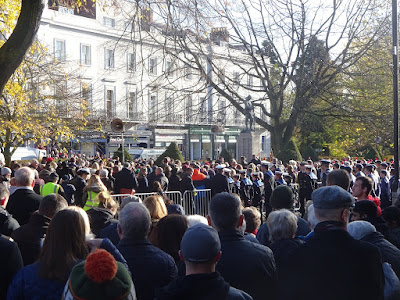 Posted by Matthew Salisbury at 08:22 No comments: