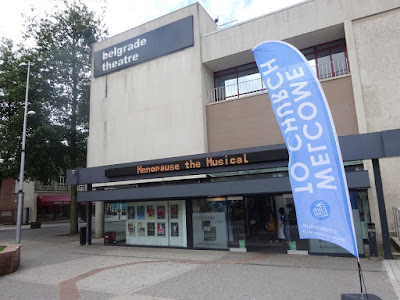 There are plenty of churches operating away from their home. Those that have homes can end up being displaced for one reason or another and forced to find a new place to meet. This can often be a real threat to existence.

It’s a subject the city of Coventry is having to address at the moment though not in terms of its churches. Coventry City, for a whole host of internecine reasons I’m delighted to say have no place in this blog, will be playing their home games in Birmingham when the new football season starts. They’ve had to do it before and it didn’t work well then. Clearly people want a familiar base, somewhere they can trust and feel at home. Somewhere they identify with.

Coventry’s Elim Church also plays its Sunday games away from home, but not as a result of any problems. Here the need is to find a space to grow. A hugely welcome problem for any church. So it’s through the glitzy foyer of the Belgrade Theatre that I stroll for this Sunday gathering, welcomed by quite the most enthusiastic of welcoming teams. The last time I was in the Belgrade was to see a musical based on the songs of Ian Dury; a fabulous evening of hummable songs, uplifting narrative and with a message of inclusion and togetherness for us all. By the time I’m heading back toward the car, I’m inevitably drawing parallels. 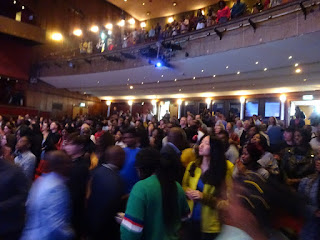 Like most modern Pentecostal services, this one starts with music. There’s a nine-piece band pumping through half an hour of fine, singalong anthems. The lyrics are not quite Charles Wesley and the music considerably less complex than Stanford, but these songs work by being simple to pick up and easy to build into an ecstatic finish. And the band are top-notch. By a joyful quirk of fate I’ve positioned myself a row in front of a woman with a tremendous voice matched only by her desire to share it with the masses. Once I’ve adjusted the hearing aids to cope with the mighty volume, it’s like experiencing the whole gig in surround sound.

As the band take a well-earned rest we get prayers, parish news on the big screen and a line-up of very young children to be welcomed into the family. It’s certainly a big family. There’s hundreds here today - there will be plenty of touring shows at this venue envious of so few empty seats - and the return to the normal church building next week will mean two services just to cope with the hundreds. 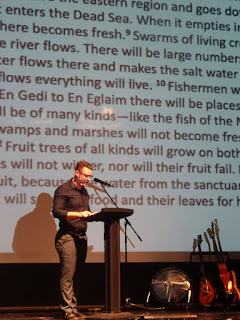 The talk this morning stems from verses from Ezekiel - the passage describing a great river emerging from the ruins of a temple, broadening to become a source of food and life to the whole area. We get to follow the words on the huge, stage-wide screen and we get videos too. In this case it’s a splendid film of this morning’s pastor bravely immersing himself in a very uninviting lake to make the point about the biblical river being a metaphor for our own commitment to faith. We’re all, he says, quite happy to go ankle-deep, but greater rewards will be ours for having the courage and the steadfastness to get right in and swim. Which he then does. It’s a wonderfully visual point, brilliantly made. The fact that he probably froze half to death and risked any number of stomach-crunching diseases to make that point, merely serves to underline how far a committed person may go. I’m still just dipping my toes of course.

It doesn’t end there. The river’s ability to contain, support and sustain life should be, we are told, a reminder to us all to take that hope and love out into the community and help feed those who are hungry, homeless, confused, troubled or afraid. As finale songs go, it’s a strong one and it’s hard not to feel uplifted as the curtain finally falls and the houselights come up. I’m reminded of the comparative hopelessness of the ‘go out and spread the good word’ message which started this blog half a year ago. This, evidently, is how it’s done.

This being a theatre I’m tempted to praise this as an excellently-crafted production. A clear message presented in a richly entertaining way by a faultless, professional cast. And it was. But it’s more than that. In the enthusiasm and sharing of the hundreds who came this is as good an example of a church working perfectly with its members as you could expect to see. By the time Elim returns to the Belgrade after the theatre’s refurbishment, the queues will stretch out of the foyer and round the block. Like the river bursting from the temple, it’ll run and run. 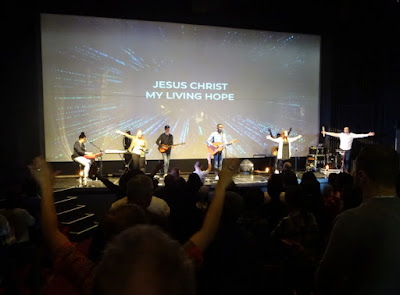 Posted by Matthew Salisbury at 09:53 No comments: