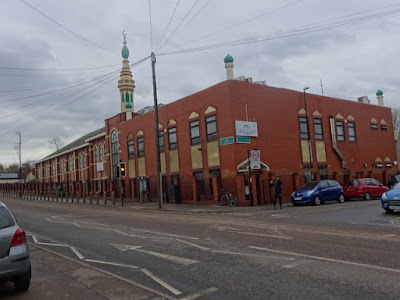 My satnav says it takes sixteen minutes to get from my home to Stoney Stanton Road in Coventry and the mosque where I’m heading to join Friday prayers. I know plenty of people for whom the journey might as well be sixteen hours.

To many the mosque - and those who go there - really are from a different world. This isn’t the place to debate prejudice, bigotry and ignorance, but we live in times when Islam’s appearance on our TV screens or newspaper pages tends to be about anything BUT the religion itself. Blithely bracketed with terrorists and barbaric practices and, most recently, the victims of one of the worst, most cowardly massacres in modern times, these are delicate, perplexing times for the muslim community. I have no qualms whatsoever about going. I know that my intentions are honest and respectful. But it’s still a step along a path I’ve never trodden.

Above all there is the fear of giving offence. I am constantly alert to the possibility of inadvertently going into a place I shouldn’t, saying or doing the wrong thing - or as often as not, failing to say or do the right thing. I have to say that this feeling is there for all the places I visit which hold some sort of unchartedness for me. I’m actually no more at home in a Catholic church or Kingdom Hall than I would be in a mosque, synagogue or gurdwara. It’s probably just the sense that there’s a heightened tension surrounding Britain’s relationship with Islam at the moment that makes me even keener to get it right.

Having made tentative searches on the internet I am soberly dressed, right down to socks I am confident could offer no offence, and I wear on my face an expression of benign amiability. Now I know how election candidates feel. 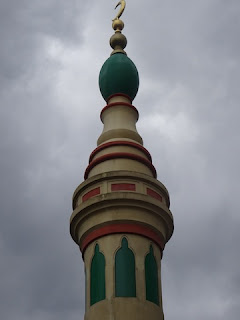 The welcome here is as strong as any I’ve encountered. The unknown can be as scary as it can be exciting. This mosque - and Islamic centre - is clearly aware of that and presents a very friendly face. Duly cleansed by the offer of scented oil I take a seat at the back of the hall. I note that my companions on the lone row of chairs are all either very old or toting clearly debilitating injuries. I wish I was a bit more supple and could actually take part.

The modern purpose-built hall gradually fills up as prayer time approaches. This hall, plus another within the centre will all be full. It’s a very big centre serving an ever-expanding community.

Friday’s congregational prayer is preceded by a sermon exhorting all to remain true to what they know to be right. The world, says the speaker, is full of forces which seek to divide and cast doubt. Only by sticking true to the principles which bring you here today can we all avoid being dragged off the right course. It could be a lesson for anyone from any religion, or indeed none.

The Salaat-ul-Jumu'ah itself is impressive. The hall is packed, with appeals to  ‘move on down the bus’ and stand shoulder to shoulder. It is as clear a physical expression of devotion and togetherness as you could expect to see. It’s as intensely observed as it is brief. 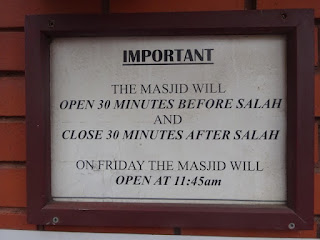 Once the shoes are on and the packed hall has emptied, the focus switches to the streets outside where the socialising happens and a hundred different conversations take place. I get warm greetings and handshakes from many and a much longer discussion with a man who was born a muslim and came to the city in the 1960s. So keen is he to welcome me and show what being a muslim means that we spend half an hour sitting in the car park comparing life stories and watching a phone clip outlining the five pillars of Islam. It’s an entirely friendly gesture. He’s very keen that I go again. I’m sure I shall.

According to my car park correspondent, one of the pillars of Islam seems to encourage constantly hitting a notional reset button to ditch distractions and return to what’s important to you. Another is the notion of pilgrimage. The phrase often used is ‘to travel with intent’.

For me that doesn’t necessarily mean having a fixed target in mind, just the conviction that your journey should be one from which you can learn something, anything. It’s not where you travel, but how you travel. So where should such a pilgrimage take you? A journey of sixteen minutes may seem unlikely to yield a great reward, but if it makes you think things you haven’t thought before, it’s as good as a lengthy trek through a strange but thrilling country. 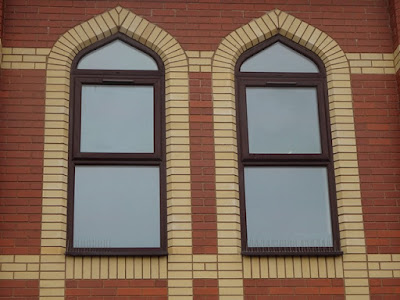 Posted by Matthew Salisbury at 10:23 No comments: