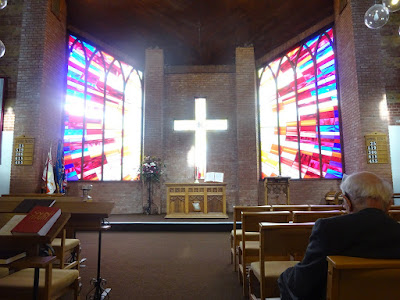 I’ve only ever visited this church once before and that was a long time ago. It was for a wedding way back in the 1980s. I dimly recall a narrow, rather dark space with us all wedged in while a distinctly Sale-of-the-Century organ led us through a jaunty Onward Christian Soldiers.

The fact that I don’t recognise it today has less to do with my failing memory and more to do with the total transformation the church went through in the early nineties. A ninety degree shift of orientation and the addition of a fabulous stained glass feature wall produced a real landmark building. It’s become a very recognisable part of the skyline. I’ve driven past it many times but, even on this foggy morning, the effect has to be seen from within - light, colour and space in abundance.

There’s a warm welcome and a fairly healthy congregation. The service, conducted by Rev Barbara Greenwood, is simple, straightforward and comparatively light in tone with room even for the odd bit of humour. There’s a theme of doing the things we can do and leaving the rest to God. The hymns and songs are well-sung - something you’d expect from Methodists perhaps - and are very well played. It makes quite a difference to a church to have a talented and versatile musician in the team. 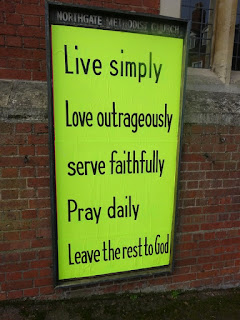 All of which acts as a prelude to a quite remarkable moment and probably the bravest and most relevant sermon I’ve heard. It comes against a backdrop of a Catholic conference on abuse in the church, the ongoing arguments over whether or not to let Shamima Begum return from her time with ISIS and the truly disturbing rape and murder of a six-year-old girl in remote Scotland. In all these cases it’s hard not to be carried along by general feelings of revulsion and a clamouring for fairly base revenge. Unmask the guilty clerics and those who helped conceal them; let her rot in her ISIS camp, she deserves all she gets and we owe her nothing; publish his name and his picture in the full knowledge that this makes an act of vigilante justice more likely.

The gospel reading this morning is the oft-quoted passage about turning the other cheek, forgiving and praying for those who do you any harm. The expectation could easily be that we’ll be encouraged to apply this instruction to the current mood and advocate calm, understanding and reconciliation.
But Rev Greenwood doesn’t subscribe to that. Not today anyway. And not having recently acted as chaplain during a safeguarding training event.

If the Bible says you must forgive, then the Bible has got it wrong, she says. It is right to feel angry, right to feel sickened and right to find automatic, blanket forgiveness a step too far. So don’t forgive, don’t just let this happen and NOT react. 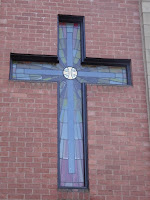 Doing nothing in the face of abuse - as one might take the Bible’s words to mean - is plain wrong. Doing nothing is what allows those abusing others to carry on. Turning the other cheek doesn’t seem to stop some people hurting, threatening or abusing others. So, at the very least, listen and report such acts and by doing so perhaps make something happen.

It’s a very brave thing to say, to admit our natural temptation toward revenge on those who have upset us. Brave too, to expose a flaw in the comfortably liberal beliefs that unite most if not all of the people here today. It’s not what you’d expect at all and is perhaps all the more refreshing for that. There are times when an unexpected voice speaks to us with far more clarity than the ones we’re accustomed to hearing. Perhaps it takes a 90 degree turn in more than just the building to make such things happen.

Before emerging into a world far less foggy than when I last looked, I make a point of thanking Rev Greenwood for her words and impressing on her how brave I thought they were. I have no way of knowing if anyone else felt as moved as I did, but I firmly wish that more people - a lot more people - could have heard it. 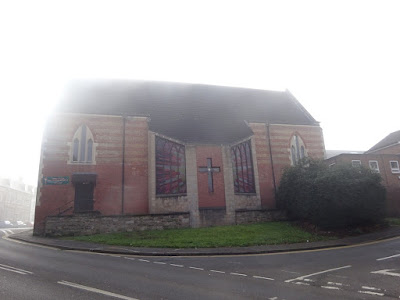 Posted by Matthew Salisbury at 07:26 No comments: