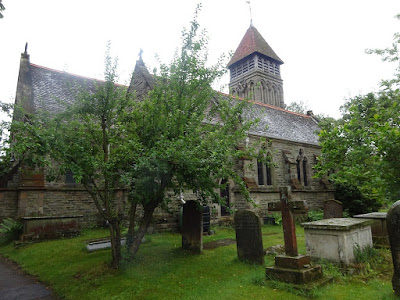 One of the conversations I’ve had quite often with friends since starting this blog and my wanderings round churches crops up whenever they ask me where I’m going next.

I’ve amassed an impressively long list of places I’d like to go and I’ll often have an idea of where my next visit will be. But mentioning the name of the church often brings a bit of a blank expression on the face of the person asking me.

A very flimsy observation would be that we often know where a church is, but not what it’s called. Round towns and cities we tend to refer to churches by which road they may be in, or which more secular landmark is close enough to pin down the location - the big church near the Shell garage, for example, or the modern one near where you park for Argos.

Out in the countryside the churches seem to be synonymous with the village in which they stand. So, this week I’ve been telling those kind enough to enquire that I shall be at St James’ - then adding ‘at Old Milverton’ when they look bemused. 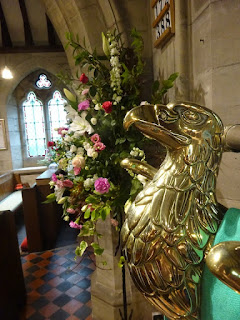 The naming of churches is probably covered exhaustively by those of a scholarly and ecclesiastical persuasion. I’ve often wondered if it actually mattered. It helps differentiate, certainly, but is there any more than that I wonder. I can’t imagine people would travel too far simply to be a member of one congregation purely on the basis of that church’s name. Would some saints prove more popular than others in attracting the crowds? Would St Peter’s be packed out while St Kentigern’s stands empty?

Perhaps church names are of as little importance as those of pubs. I’ve never chose to visit one pub over another purely as a result of its name. You don’t have to be a royalist to go through the doors of the Queen’s Head or feel you are more likely to be among equestrian folk simply because you’re in the White Horse.

But St James is St James and part of the reason I’ve come here today is that this weekend is the feast of that saint and therefore the patronal festival service of the church.

St James The Great together with his brother John were from fishing stock and were among the first to be invited by Jesus to leave behind their daily lives and join him in his wanderings and teachings. They accepted and became disciples. 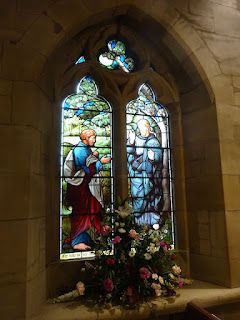 It’s hard to imagine how such an invitation from someone today would be received. The idea of turning your back on all the things you may have worked for, not to mention the people with whom you’d shared so much of your life, to follow a fairly untrodden path, no matter how enigmatic its figurehead, is almost unthinkable. It’s the kind of move we associate with people lured in by shady cults, or perhaps the actions of someone in the throes of a mid-life crisis. Not the sort of thing we’d advise doing without prior research, a decent contract and some fairly watertight guarantees.

Nevertheless, I’m sure the number of people on their deathbed regretting such a rash move is hugely outnumbered by those reaching the end regretting that they lacked the courage to give it a go when the chance presented itself.

Perhaps having a little bit more of St James in our lives wouldn’t be a bad thing. It’s something which I ponder every time I daydream about walking the route to Santiago knowing I’ll probably never take so much as the first step.

The service this morning is bright and cheerful. The welcome in this beautiful and clearly much-loved church is warm and genuine. We’re treated to a sermon touching on the example of trusting faith set by St James, full of splendid humour and topical relevance. In the collect for St James’ Day we ask for divine guidance in turning our backs on the false attractions of the world to follow a better path. I’m not entirely sure what those ‘false attractions’ might be. I only hope I’m steadfast enough to make the right decision when it comes along, even if that decision is to at least lift the curtain on a few false attractions just for completeness’ sake. 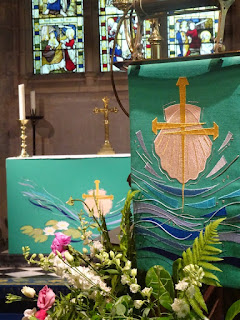 It has become something of a gentle joke but nothing which takes place in a church seems to be complete without coffee afterwards. At times I’m tempted to wonder if the church believes that the friendship, understanding, redemption and salvation it offers is not enough to bring the people flocking, but offer a cuppa and the masses will beat the doors down.

Coffee after the service is a bit more than that of course. It gives the opportunity to socialise and reflect on the message of the morning and the wider significance of spending these times together. Somehow the ritual of standing round sipping a cup of tea or coffee makes those conversations easier.

This service goes one better (a lot more than just one better in truth). Today being the rough equivalent of a birthday for the patron saint, the service is followed by generous glasses of wine and some truly splendid plates of nibbles. These treats were supposed to be enjoyed outdoors in the churches fabulously picturesque churchyard, but this being England in the summer we’re forced indoors by some fairly heavy rain. Nobody would want the problems of a soggy canape or rain splashing into your wine glass.

I wonder if, had the weather on that morning at the sea’s edge been enough to make anyone think twice about venturing outdoors to listen to a wandering preacher, James’ life would have turned out different. Probably not. It’s the decisions we make which shape our lives but it’s the conviction and vision within us that shapes those decisions. Perhaps that’s why he became a saint and I didn’t. 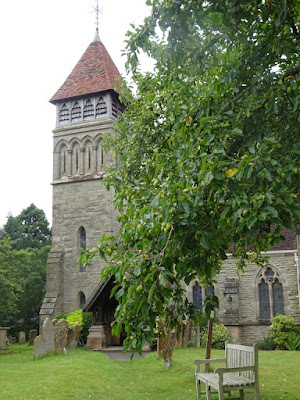 Posted by Matthew Salisbury at 11:15 No comments: