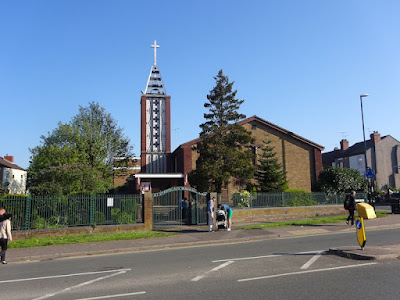 The Catholic church of St Stanislawa Kostka is just off the city centre and caters for the city’s growing Polish community. Interestingly it is only a stone’s throw away from the Gurdwara Guru Nanak Parkash and the Shree Krishna Temple. A two minute stroll would get you to the Spiritualist Church or the Jamia Mosque. And there are plenty of others close by. Not a bad choice really - I’m surprised the city council hasn’t started marketing the area as Coventry’s multi-faith quarter. It’s probably only a matter of time.

It should be noted that, far from being new arrivals, these places of worship and the burgeoning communities they represent have been in the city a long time. They are well-established and clearly very popular. They are part of a very diverse cultural complexion which should, you’d think and hope, be a useful force in countering the violence and knife crime which blights these modern days.

St Stanislawa’s really is packed this morning. The pews are shoulder to shoulder and there are people crowded in at the back and down the aisles. It being a glorious morning, the doors are open and there are even people peering in from outside. There’s a few up for baptism as part of this first mass and most are looking suitably smart for the occasion. It’s a lovely setting. A fine mix of modern light and colour with some traditional fittings included. There’s a similar mixture in the music too. The songs are led by acoustic guitar and percussion with a more traditional organ accompaniment coming in when called for. 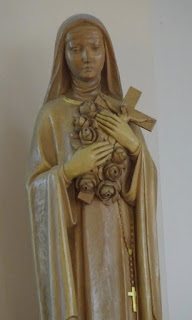 From first to last there’s not a word in English, as you’d expect. Does that matter? Having been to a few masses in my time I don’t find it too hard to keep track of where we are in the normal course of things. The responses and songs all have a pleasingly Eastern tonality to them but much is the same.

Not that it would make a difference if every word were in English such is the non-stop background babble of chatter - mainly, though not exclusively, from children. I’m convinced there are more children in this church than any I’ve been in. That bodes well for a lively, if noisy, church in years to come. I’m not complaining however. This whole service has a genuine feeling of family and community about it. It’s as if all those not directly involved in the baptisms have just come along to watch. There are times when the whole congregation suddenly responds in unison and I’m genuinely surprised to find they were all listening.

The service over, there are families grouping together for pictures to remember baptisms. This community strikes you as very together and very tight. Not excluding others (I felt entirely welcome) but celebrating what they share. I can’t help but think this is what it will be like back at the family home enjoying another very Polish Easter. 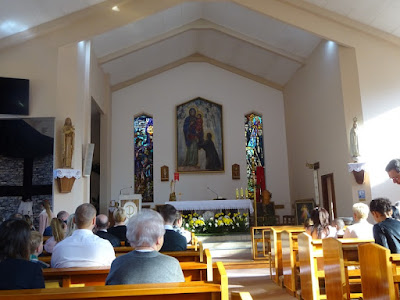 Posted by Matthew Salisbury at 09:07 No comments: 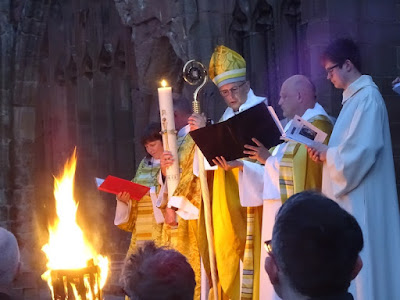 Perhaps it’s Easter, perhaps it’s the very early start, perhaps it’s just the fact you can drive into the city centre without seeing another car and take your pick from any number of parking spaces - but there’s something rather special about this dawn service. And it’s a feeling which is sustained all morning.

The gathering starts in the old cathedral ruins. Lit only by a flaming brazier there is a brief service celebrating the creation of light and all it stands for.
The appearance of this light picks up the symbolic extinguishing of light at the Maundy Thursday service which ends in complete darkness. It’s an arresting sight as the first hint of daylight creeps through the windows of the old cathedral. 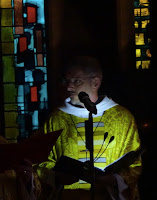 Easter is, it’s somewhat obvious to say, a big event in the Christian calendar. The biggest really. And this is a big service. As well as two people who have taken the decision to get baptised on this day, there are a number of others being confirmed in the faith, some young some not so young.

As the light begins to build through the cathedral’s wonderful stained glass and plain screen Easter is proclaimed accompanied by full-throttle organ music, fevered peace bell ringing and - despite the early hour - party poppers sounding like starting pistols in the echoing acoustics. It’s an unrestrained moment of joy and sets the tone for much of what is to come.

The focus moves to the slightly incongruous plunge pool where the full immersion of those being baptised is carried out by the Bishop. No danger of a dipped finger on the forehead here as the two taking part are laid back under the water and then raised back to their feet with much acclamation and applause. It’s an experience neither of them will ever forget, which is as it should be. 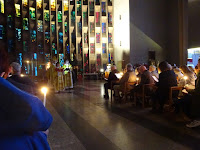 There’s a huge feeling of joy about this service. There are lots of smiles not just from those being welcomed to the faith but from the whole cathedral team. After the dark reality of Good Friday it’s the new life, new dawn the whole church is built upon. And it’s enough to send you back out into the still early Easter morning with a spring in your step. 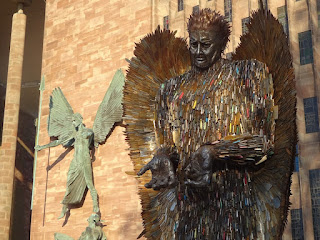 Outside I pause, along with quite a few, to view and take pictures of the Knife Angel. This imposing metal figure of an angel holding out empty hands is constructed in the main from thousands of knives surrendered to police in the fight against knife crime. It stands, temporarily, next to the cathedral’s own celebrated sculpture of St Michael subduing the Devil with a very sharp-looking spear in his hand. Many people have come to see the Knife Angel and left tributes to people they’ve lost through this current wave of senseless violence. There are pictures, ribbons, messages and so on. It’s very moving.

I pause to wonder how much those bereaved in such circumstances would love to be able to vanquish death and bring back their loved ones. Or to believe with certainty that they will all meet up somewhere in the future. This is the comfort the church is offering through the story of the resurrection and all it means and Easter is the embodiment of that. 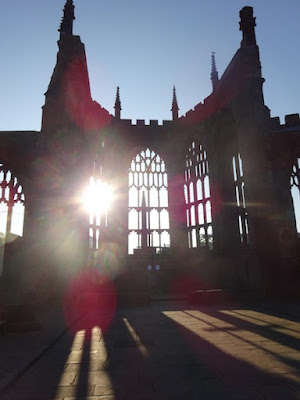 Posted by Matthew Salisbury at 09:03 No comments: