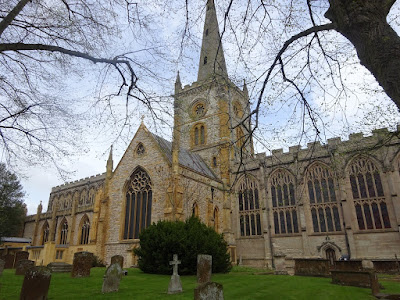 This Shakespeare Service is part of Stratford’s wider annual celebrations of the Bard’s life and works. Shakespeare is (obviously) big business to the town and Holy Trinity, being his resting place, has a big role to play. Like the dramatic works it celebrates, this April fixture has a fine cast of characters, a splendid setting and a well-rehearsed script.

It’s a morning of civic pomp. The roads around are blocked off and a procession featuring, among others, the Mayor, the town council, the services, the scouts, the MP, other Shakespeare organisations and so on, makes its way from the town to reserved seats in the nave of this magnificent church. Many years ago, as a member of the local press, I used to take part in this tradition and if I had to pick a quintessential Stratford moment it might well be this. It’s church attendance performed as a demonstration of civic status and, as befits such an occasion, there are plenty of hats.

Holy Trinity is a church which lives up to its importance on this very public stage. It looks fabulous, enjoys a perfect setting on the river and boasts many fine bits of history on top of the oft-photographed memorial which today has him holding the ceremonial quill. 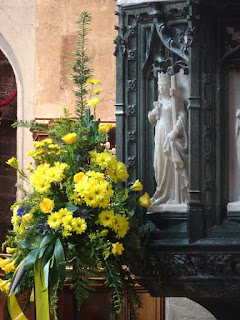 The church is full, once the full length of the procession has been directed where to sit, and the singing is full-bodied. The theme for the morning is the nature of mercy. We get top class readings from RSC actors and directors together with some fine musical moments. We also hear the Shakespeare Sermon from The Revd Canon Dr Jessica Martin whose credentials (let alone her titles) from Ely Cathedral and the English literature department at Trinity College make her words on mercy most interesting.

But what strikes me is not just the word ‘mercy’ but the nature of language itself and the power that words hold, particularly in this setting.

Some of the words Shakespeare wrote are as clear to us today as when they first slid from that quill onto the page. But not all of them. Some represent ideas we now find abhorrent or tough to grasp. Many of the plays contain aspects which actors and audience alike would label difficult. And with only the bald, unadorned words to go on, there’s not a lot of help for those searching for the truth behind the words. Pretty much the same could be said of the Bible and the words of the liturgy we’re encountering again today.

Scholars of both books have spent many a fat volume of their own trying to tease out nuances in the endless search for the true meaning of the text. But, as anyone who has actually spent time pondering what ‘Brexit means Brexit’ actually means, would attest, meaning is a terribly hard thing to pin down with anything like complete accuracy. Words change their meaning over time and represent vastly different things to different people. Definitive definitions, it would seem, are often very hard to define. 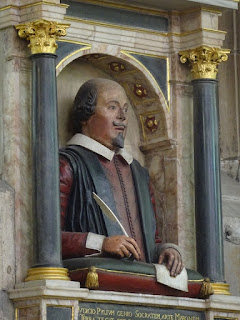 The truth is that the bible - and I’d probably say the same for any holy book - shares with the plays of Shakespeare an ability to be interpreted and understood differently by different people over different generations. And it’s precisely there that the enduring strength of both works lies.

Write a text with an exact explicit meaning and it will probably end up rooted in its moment and, as time and opinion move on, become ever more dated and irrelevant. It’s precisely because we CAN find mysteries and ambiguities in great books that they continue to speak to us and will always reflect our interpretation of them.

Some of those reading extracts from the plays during this service are currently to be seen in a production of The Taming of the Shrew which swaps genders to provide a fresh perspective of the age old battle of gender politics. It seems to have been a worthwhile exercise if the comments I’ve heard are representative.

I wonder then what the actors made of the service’s opening call from the KES head girl to ‘let us now praise famous men’. Perhaps it’s enough to note that Shakespeare’s old boys’ school now HAS a head girl at all; perhaps it’s a lesson that language can be just as powerful by its omissions as by what it says. 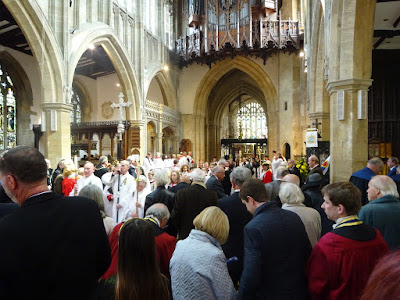 Posted by Matthew Salisbury at 07:43 No comments: