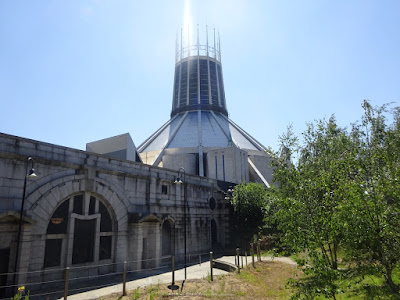 Way back in the 1980s I was a bit of a record collector. I would be quite happy browsing the racks of whichever record shop I was in, checking on albums I’d long desired in case of a bargain, and thumbing through what they’d got by my favourite bands in the hope of finding an unexpected rarity.

Like many record buyers I was drawn to the allure of the megastore. These massive, warehouse size record shops sprung up all over the place - my favourite was in Oxford Street in London where the racks went on for miles and there were whole rooms for different music styles. Bigger, you’d be led to believe, was automatically, demonstrably better.

When it comes to megastores of the Christian world, Liverpool is better off than most. Not only does it have one huge cathedral, it has two. And they’re both magnificent. I’ve been to Liverpool for a day out many times and, no matter what other attractions the city might offer - from the docks to the Tate Gallery to the Cavern Club and so on - it’s these two beautiful examples of architectural vision and unswerving faith which always pull me in.

The Metropolitan Cathedral Church of Christ the King is the Catholic focal point of the north and a genuine icon in its own right. It’s still-modern spiky hat  can be seen for miles around and the occasional brutality of some of the exterior gives way inside to a feeling of colour and space which always impresses. On this brilliantly sunny day the light pouring through the stained glass is throwing huge patches of red, blue and green into the giant arena under the soaring conical roof. The scale of the plain walls allows or some monster big tapestries and banners and each of the many chapels round the perimeter boasts a design worthy of exploring. 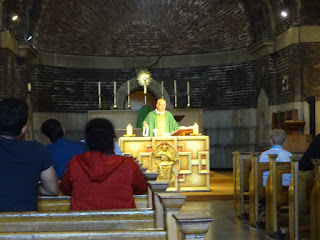 I’ve come for a lunchtime mass but it won’t be in this fabulous space. It’s tucked away in the crypt chapel, and I’m directed back out of the main entrance and round to a subterranean side door. I’d be tempted to think it a bit much that worship has to make way for the selfie-brigade snapping away at the undoubted highlights, but the crypt chapel with its vaulted brickwork and mysterious alcoves is still a fabulous space.

Mass is held for a small congregation many of whom look like they’re just taking an hour out from a busy day. There’s no concession to this being an obvious tourist spot, it’s just a normal service regardless of its noteworthy setting.

If you head down the cathedral’s stadium-like front steps and walk down the aptly-named Hope Street, your way will soon be blocked by the unbelievably massive bulk of Liverpool’s Anglican Cathedral. Any superlatives lavished on the Catholic cathedral can, in my view, be doubled here. This building is simply the biggest thing I’ve ever seen. Of course there’s statistics to back that up. The tourist leaflet runs through them all; the UK’s biggest cathedral, the highest tower, the tallest Gothic arches, the heaviest bells, the largest organ in the nation and so on.

And the feeling inside really does reflect this. The gothic styling is huge and the fact that it was built with relatively modern building techniques just meant they could scale it up even more. It’s like someone has lined Cheddar Gorge with bricks and then upended the whole thing. The height and length is just stunning. 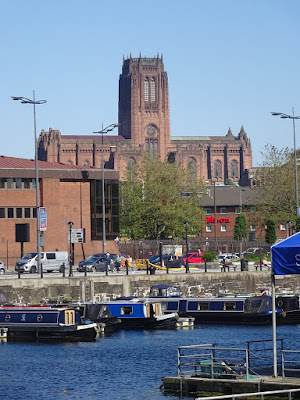 I’m in the choir stalls at the very eastern extremity of the interior. On one hand I’m overshadowed by the enormous gold carvings behind the high altar, in the other direction the nave disappears off into the distance and the vast stained glass window above the western entrance about three miles away. Of course that’s an exaggeration, but I can’t be the first to wonder at an indoor expanse not even Chris Gayle could outhit.

Evensong is held pretty much after the cathedral has closed for the day so the congregation in the choir is fewer than a dozen with a clutch of late-stayers halfway down the nave enjoying the acoustics. The service, however, is not small for all its meagre attendance. The choir are magnificent and the reverb from the endless, towering walls utterly beguiling. The organ’s lowest pipes are disconcertingly visceral and the whole spectacle is worthy of its setting.

So is what’s offered at these two flagships of the faith equally scaled-up? Well no, not really. I found myself talking to a woman fortunate to be working as a canon in the Anglican ‘megastore’. She told me it was easy to become lost in the sheer majesty of the place. It was important, she said, to take the time to push all the statistics and the visual glories to one side and remember that, huge as they are, they’re still churches performing the function that all churches do. There’s nothing different solely as a result of being huge.

I’m reminded that, even in Oxford Street’s vast vinyl paradise, The Clash by then had only produced a trio of albums, there were just more copies on the racks. A lot more copies; not different, not better, just more.

These massive cathedrals make a massive statement, but it’s the same statement made by every parish church. But their size is still part of their appeal. They’re a testament to what can be done when a whole city gets behind a project. The scale of their presence is more to do with the pride this city has always had in itself than anything else. 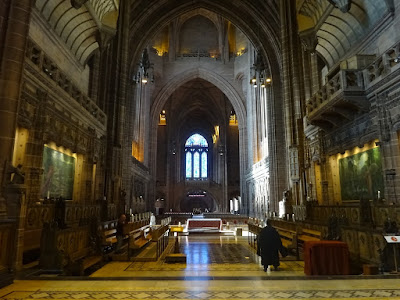 Posted by Matthew Salisbury at 14:03 No comments: