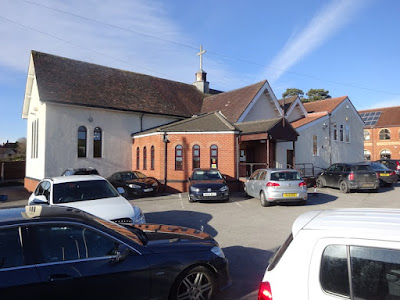 The last time I was in a Greek church was, fairly inevitably, on holiday on one of the many Greek islands we visited in the 1990s. I remember two among the many: One when we felt obliged to go in and part with some drachma after the oldest woman on the island struggled up the steep hill with the keys to let us in, another where I spent about an hour immersed in the evening intoning during a seemingly endless marking of a saint’s day. Then, the relative gloom and stonework of the church was a temporary haven from the heat, today it’s minus 4 and everyone’s wishing the heating was more effective.

Westwood Heath is, on the face of it, an unlikely place to find a fully-fledged Greek church. But, as Spike Milligan once observed, everybody has to be somewhere - so why not here? Outwardly The Greek Orthodox Church of the Holy Transfiguration is a modern church surrounded by upmarket edge-of-the-city newbuilds. Inside it is a stunning display of icons, screens, candles, lamps and wood. Once the incense has been generously sprinkled from one end of the building to the other, it’s hard not to imagine yourself somewhere a lot warmer and more exotic.

Father Theodoros Polyviou - who must at some stage of his life have looked in the mirror and decided that if he looked that much like a Greek priest, he may as well become one - arrives in the car park at the same time I do. He’s very welcoming and invites me to sit in while he prepares for the service. This visit is really three services in one. Matins, the orthodox liturgy and communion and finally a more intimate family blessing of sorts. 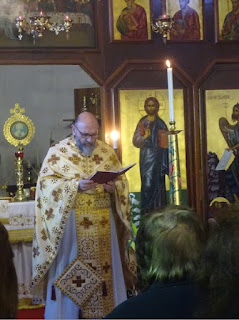 And so the morning begins. Most of the service is intoned. Only a very few things are said - most notably when Fr Theodoros kindly switches to English. It’s hard to say when Matins actually starts, it just seems to drift in. But when it does start there’s only four of us in the building - priest, two deacons (I’m making a guess here) and me.

The service is sung mainly by the very friendly female deacon while the other two busy themselves out of sight with preparations. Another man arrives just in time to kiss the icons and take his place in the choir. Two more men then drift in to complete the trio. Walking across the stage to deliver bread or greet each other, chatting while someone else is singing, finding some hidden mints and offering them to your fellow intoners - it’s a very relaxed start here.

The same goes for those in the congregation. There are group discussions, children bickering and looking dangerous with candles, people coming in with food for the table - and while they’re not oblivious to the worship going on, there is a definite sense that it’s something to view rather than take part in. There’s very little by way of congregational prayers or responses. It’s a pleasingly relaxed attitude.

Three boys arrive and wander backstage to get ready just in time to come out carrying candles. I’m reminded of being in a taverna once where I swear they took our order ten minutes before the chef even turned up. It will all work out in the end. Fr Theodoros alluded in greeting me to things being conducted on ‘Greek time’. And how. 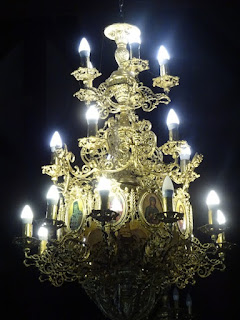 By the time we’ve segued seamlessly into the Communion service the place is filling up. Two dozen people have sauntered in, kissed the saints and taken their place. As the Gospel reading gives way to the breaking of bread, the number is approaching a hundred. I’m left with the feeling that this audience knows the play very well and has timed its entrance for the bit it likes best.

Once fully assembled though, it’s an impressive and clearly supportive community. Being so far from your homeland (and again I am aware I’m making a broad assumption) can create a very insular community more intent on clinging to its particular identity than in letting in the outside world.

But that’s not so here. As we put our coats on and prepare to head back out in the cold, Fr Theodoros reminds everyone of those in the city feeling the cold even worse than ourselves - addicts, the homeless, those with nothing. This church will be out on Coventry’s streets this week offering food, warm clothing and a supportive word. And he wants volunteers to shoulder the work. An ancient church perhaps, but one with a very current outlook. 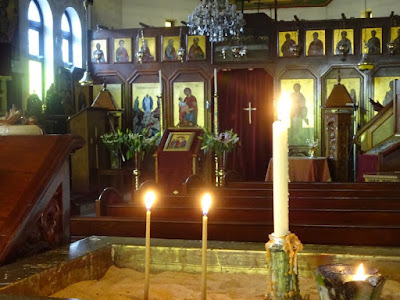 Posted by Matthew Salisbury at 10:15 2 comments: