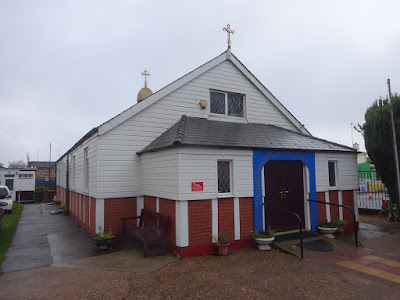 This pilgrimage has been a great eye-opener for me. I’ve come to appreciate the incredibly diverse nature of the religions happily existing alongside each other in our towns and cities. I’d recommend opening the doors and taking a look inside to anyone - and, if I had to name a convenient starting point, I’d recommend a stroll up Stoney Stanton Road. Mosques, temples and churches of every hue are lined up one after another on this road. You’d never be lost for choice if you called this place your home.

This morning I am toward the outward end of this long street, one of those edge-to-centre ribbons so beloved of urban geographers. In a small patch of land surrounded by halal supermarkets and tightly-packed houses is the Ukrainian Catholic Church of St Wolodymyr the Great. It’s a church I’ve looked forward to visiting since I first drew up a list of all the many possibles I could include in my travels. 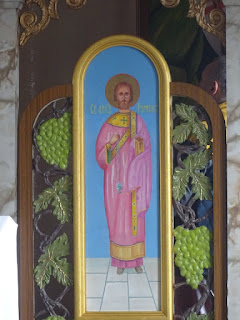 Outwardly the painted wooden building could be taken for a scout hut or community space, but inside the picture is completely transformed. Dark wood pews and paintings all draw the eye forward to a splendid screen of  colourful icons and vine reliefs in a series of marbled arches. It’s very impressive and plays its part throughout opening and closing at various points as incense and holy artefacts are brought out.

It may be a small church but this morning the turnout is strong. True to my experience of orthodox churches, such as it is, time is only a secondary concern. The mass has started as I arrive, despite me beating the published start time by ten minutes. The pews continue to fill up steadily after I’ve chosen a spot - there are people still arriving, kissing the icons and sitting down as the hour mark passes. I have no idea why this is. In most village churches, such latecomers could expect frowns from their neighbours and a stern (but anonymous) mention in the following month’s church newsletter. Here it’s just the way it is.

I have always had a love for the music of Eastern Orthodoxy. There’s something appealing and dramatic about the plaintive minor key liturgy that has always managed to transport my thoughts to far off lands. Perhaps it’s the sombre, low voices, or the fact that I can’t understand a word - whatever it may be it’s a joy to hear excellent singing here for this mass. The singing is carried out with confidence and gusto - not bad thing given the fact that for roughly half of the service, the priest and his singing worshippers are up against some noisy competition. 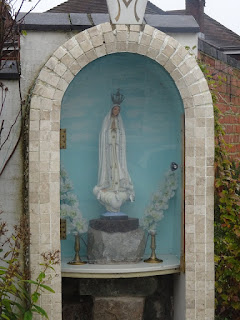 Today is a festival day for the city’s Sikhs who are celebrating a landmark in the religion’s history by staging a party in the park preceded by a parade up the road on the other side of this church’s wooden walls. With their chants, songs and drums, Sikhs on the move can be joyfully noisy and their passing adds a thumping rhythm to the usually tranquil liturgy.

I so wish those whose fears of immigration and cultural differences are stoked by the extremes of the current political tensions, were able to appreciate this diversity for what it is; something a city whose very existence was threatened by forces of such blind intolerance should be hugely proud of. Indeed, last night I joined people of all faiths and beliefs in watching a light show at the cathedral highlighting just that. I suppose that means there’s still hope even in these dark times.

Father Aleksandr, who presides from start to finish assisted by a small team of prop-bearing roadies, delivers a sermon based on the text of the morning, the relationship between the rich man and his slave Lazarus. I only know this to be the chosen reading because Fr Aleksandr unexpectedly breaks into English at a few points. It would be rude (and probably erroneous) to make such a judgement, but from the way everyone else was joining in, I had assumed I was the only linguistic outsider.

The service is is all-sung and by the time communion is offered I’m tempted to join in with my own phonetic version of the responses I’ve heard. But I resist - the welcome has been warm and I’d hate to put my foot in it with a howler of Boris Johnson proportions.

After the mass, and with the Sikh procession only a distant drumbeat, Fr Aleksandr comes to extend a welcome to me. I thank him for the English parts of the service. He tells me with a broad grin that he recognised me as a visitor but assumed, from my white beard, hair and patronly stature, that I too was a priest. Is it too late to retrain I wonder? 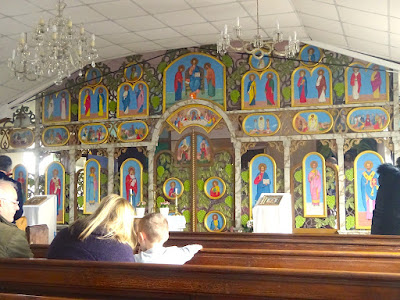 Posted by Matthew Salisbury at 06:35 No comments: