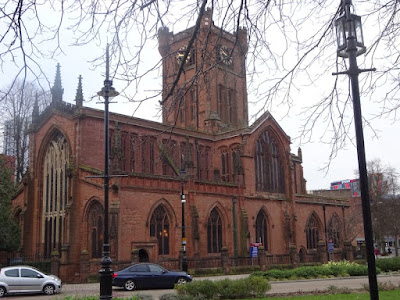 St John’s is a very imposing church inside and out. It looks a real city church occupying a commanding position which somehow manages to rival the much bigger, much bluer IKEA at the opposite end of the road. The city has grown up around it and it’s hard to get a picture which doesn’t feature some sort of high-rise development as a backdrop. City life has also given the already heavy masonry a thick coating of urban grime. It could look gloomy and off-putting. PD James would definitely place a grizzly murder here.

Inside it’s impressive too. Fabulous stained glass windows and stonework as you’d expect from one of Coventry’s oldest churches. But it’s the height that is most striking. Perhaps it’s the fairly compact horizontal measurements of the building that makes the distance to the vaults above look so great. Either way it’s a tall building to heat and, on a very cold January morning, it’s freezing.

The cold of the building is more than made up for by the warmth of the welcome from Father Dexter who comes over to shake my hand and introduce himself. Others follow. City people are generally more reluctant to greet strangers than those in small towns. The same could be said of tight village communities perhaps. That they are so welcoming here is, I would say, the central purpose of the whole exercise.

It being Epiphany, there are a number of traditions to be observed in this fairly high-church Catholic mass. Models of the Magi are brought in by procession and installed in the crib; the dates of the year’s moveable feasts are formally announced; pieces of chalk are blessed so the congregation can invoke a blessing on their homes and, in doing so, proclaim to the world that they’re Christians. 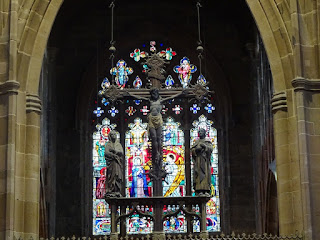 Busy times but, these being Catholics, there’s no particular sense of urgency. A most impressive - and well-played - organ keeps all the hymns at a very slow pace, there are plenty of gaps as the Priest moves from place to place and the communion queue is equally leisurely. These people have done this countless times before and there’s a real sense of comfort in its gentle, unchanging progress.

This is the most diverse congregation yet (I know it’s still early days). It’s what you’d expect in a city. There’s no village family demographic at work here. We have all ages - including a ten-month-old who leads his mother a merry crawl for the duration - and (allowing for a few suppositions) people from very different social strata. Most people seem to be single souls drawn to come to a place where they can feel part of something bigger.

Unlike village churches which celebrate and give thanks for their existing communities, the city church has as its mission trying to bring together a sense of collective belonging not naturally there. Join together, find a mutual purpose and demonstrate a commitment to loyalty. Perhaps in the filling in of mutually agreed diary dates and in the chalked front door declarations of affinity, we’re seeing precisely that at work. 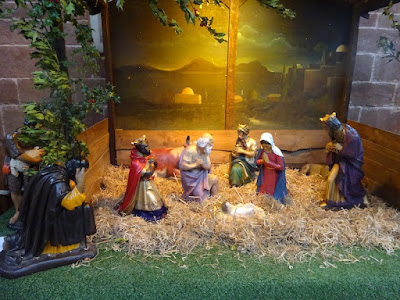 Posted by Matthew Salisbury at 09:34